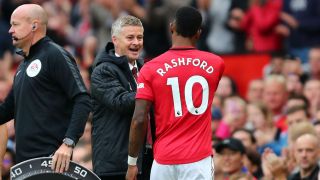 Marcus Rashford still has his critics at Manchester United despite enjoying the most prolific start to a season in his career.

The England international has found his home in the inside left channel this season under Ole Gunnar Solskjaer.

Rashford looks most dangerous running at defenders and causing problems on the flank and has formed an exciting partnership with Anthony Martial in Solskjaer’s fluent attack.

He netted 14 league goals in 22 Premier League appearances before suffering a double stress fracture in his back in January and would have been in contention for the golden boot award.

But some believe Rashford, 22,  has not developed as much as he should have done since making his debut in February 2016.

United great Gary Neville has come to the defence of the Wythenshawe born star academy graduate, likening his situation to that of Cristiano Ronaldo.

“Marcus Rashford, to be fair, is still a young player [who’s] developing, he needs to be persisted with,” Neville said, as quoted by Manchester Evening News.

“When you’re sort of a young player… Alan Shearer didn’t score a goal a game at Southampton when he first broke in. Simple as that.

“Cristiano didn’t do it at Manchester United when he first came to Manchester. We shouldn’t be expecting the same of Marcus Rashford.”

Nobody is comparing Rashford’s talent to one of the greatest players of all time in Ronaldo. But even the legendary Portuguese forward was erratic during the early stages of his career in Manchester.

Rashford is one of the key men in Solskjaer’s rebuild at Old Trafford and we can’t wait to see him develop into his prime over the next few seasons.