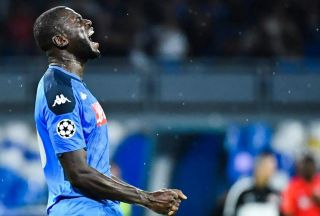 This week The Sun ran a report claiming Manchester United are in “constant contact” with Napoli over the future of Kalidou Koulibaly.

The Serie A club are believed to be resigned to losing their best defender this summer — with United one of three clubs reportedly hoping to pounce.

I’d take Koulibaly all day. Can you imagine his pace alongside Harry Maguire in United’s defence? The Senegalese centre-back is the perfect fit.

While Tuttosport in Italy claim this is likely to be the year in which Napoli cash in on their star, who is contracted with the club until 2023.

Paris Saint-Germain and Man City are also named as potential suitors for the defender.

And, that has led to Julien Laurens and Craig Burnley giving their respective takes on Koulibaly’s future, as seen below via ESPN FC:

They are both asked out of the three named clubs – where is Koulibaly most likely to end up this summer.

Laurens reckons a move to PSG beckons and points out that he recently purchased an expensive flat in the city.

On the other hand, Burnley agrees that PSG will appeal to the world-class defender, but he can’t do a video without sticking the boot into United. He hates MUFC and is best ignored.