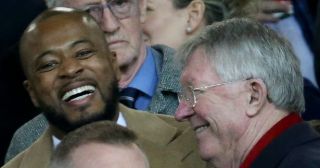 Too much time on his hands?

Another hilarious face-swap has emerged from the creative mind of Patrice Evra, this time including former Manchester United team-mate Wayne Rooney and manager Sir Alex Ferguson.

The picture itself is ridiculous but the Frenchman’s to Fergie’s hairdryer treatment may take a slight at Rooney’s struggles with hair loss at a young age.

Before we were introduced to Sir Wayne Rooguson, Evra showed the world another character worth mentioning…

Fair play to Evra for giving us all a laugh during these times of self-isolation.