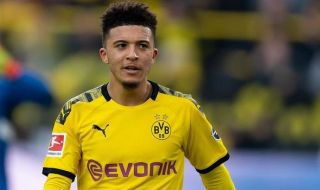 It seems inappropriate to be writing about transfer speculation right now, but despite the football season being suspended over the COVID-19 pandemic it sounds like Manchester United are making progress on what could be the biggest deal of the next transfer window.

Next season United will be aiming to at least challenge for the Premier League title. This coming transfer window is important to Ole Gunnar Solskjaer and his quest to rebuild the squad in a bid to have MUFC competing for the biggest honours again.

One player who could make a huge difference at Old Trafford is England international Jadon Sancho, who left Man City as a youngster in 2017 to join Borussia Dortmund. There he has become one of the best players in the Bundesliga and United will do all they can to sign him ahead of the next campaign.

The latest, however, is that Sancho would be open to joining United at the end off the season only if the Red Devils can guarantee him Champions League football next term, according to The Athletic’s ever reliable David Ornstein.

“I know Man Utd are keen on Sancho and before the shutdown, they were very much among the clubs in the mix and holding conversations,” he said in a live Q&A session.

“What happens now is anybody’s guess because we think the asking price will be around 120m euros and will United pay that? Does he want to go there?

“I think he would be open to it — but my understanding is he wants to join a club who are playing in the Champions League next and we don’t know if United will be.”

Despite Sancho’s transfer links with other clubs around Europe, it’s the Red Devils who are believed to be leading the race for the 20-year-old sensation.

United are currently fifth in the Premier League — three points behind fourth-placed Chelsea — and still in with a chance of lifting the Europa League and FA Cup.