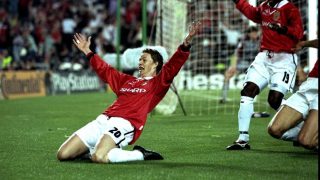 Name on the Trophy!

For those who were not lucky enough to have been in the Nou Camp on that famous night in 1999, Clive Tyldesley’s words are the lasting memory.

Tyldesley delivered some of the most iconic footballing commentary, doing justice to the most special moment in Manchester United’s history as two late goals saw them overcome Bayern Munich and complete an unprecedented Treble.

“Can Manchester United score? They always score… Name. On. The. Trophy”

These famous lines will resonate with United fans forever, but Tyldesley has revealed that he had worried that he had blown the biggest moment of his commentating career.

His instinctive reaction to the most improbable injury time comeback could not have been scripted better, but his doubts were about the potential backlash from opposition supporters.

“There were 20 million people watching that night and I think half of them probably wanted United to lose,” he told Manchester Evening News.

“The hotel was near the Nou Camp, so I was walking back and I had in my mind ‘how’s this gone down in Leeds, in Merseyside and on Moss Side, have I oversold this and gone too far?’”

Where on earth ‘name on the trophy’ came from when Sheringham equalised I don’t know, but I think that probably summed up what everybody felt,” he added.

In reality, it would have been difficult to capture a moment with such euphoria and shock much better; the commentary could only match the incredible events he had just witnessed.

The challenge in being a successful commentator is often underestimated. Those in the gantry have just one opportunity to provide the soundtrack for pure unscripted drama.