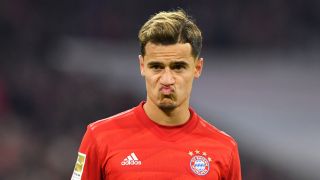 The reason this is news to us, a Manchester United blog, is we’re sick and tired of seeing Coutinho to MUFC links knowing it just isn’t going to happen.

Speaking to RAC 1 about the Brazilian’s long-term future, Setien said (quotes via Daily Mail): “Coutinho? I like him very much.

“He is still a Barcelona player. You have to pay the clause or a transfer fee to Barca. I think he can be here at the beginning of next season.”

After Coutinho’s agent recently said the player would “love to come back” to England, Stein acknowledged the decision won’t entirely be up to him as Barcelona manager.

“I don’t know if he wants to come back or go away again,” he added. “I have to talk to him and ask first. He is a great player, no doubt about it.”

We don’t believe for one second that United ever had an interest in signing Coutinho — since he left Liverpool for Barca in 2018.

If United were to sign a player like that this summer it’d be Aston Villa’s Jack Grealish or Leicester City’s James Maddison.

And, given he hasn’t exactly set the world alight at Bayern, why would Ole Gunnar Solskjaer take the risk?

Like James Rodriquez, Coutinho’s name constantly does the rounds in the gossip columns but hopefully this puts an end to the United links.

It’s beyond tiresome and we don’t think Barcelona fans should read too much into Setien’s comments. The La Liga giants will be trying to flog him this summer if they can.