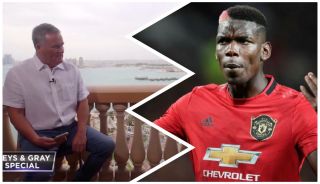 The closest thing to action we’ll get during this pandemic.

Graeme Souness has it in for Paul Pogba and the pair now appear to have lunged into a war of words.

We don’t expect Pogba to keep it going with another response, though, as he doesn’t really know a great deal about the former Liverpool and Scotland midfielder.

Richard Keys and Andy Gray have discussed the drama between Pogba and Souness, with Gray analysing his response to the French World Cup winner not knowing who Souness was… A claim the United star made on the club’s official podcast this week.

Gray, who played on the international stage with Souness, believes his ex-teammate is a superior player when compared to Pogba, while Keys says the Sky Sports pundit should have stated that at least he’s a ‘football man’.

Watch below via beIN SPORTS:

“He would’ve chewed him up!”
“Graeme’s [response] is the professional way of belittling someone!”