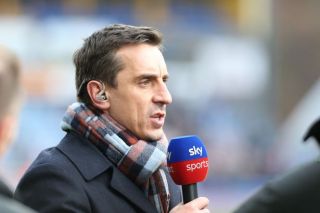 There is a number of footballers we look forward to seeing once the Premier League resumes again after the coronavirus pandemic has subsided.

Gary Neville will be keeping a close eye on the development of one particular Manchester United youngster.

That player is Mason Greenwood — a United youth product who has come through all the age groups and into the first team. There’s an immense amount of pride for fans when a local boy does this and Greenwood has made a real impression this term.

Neville was talking to Sky Sports when he gave the striker a glowing recommendation (quotes via the Daily Star).

“He can be anything he wants to be,” Neville said. “He just looks like he’s got such great composure and quality. He’s great physically as well.

“If he continues to emerge like he’s shown at times this season I think Manchester United have got the real deal there.”

Since coming into the first team under Ole Gunnar Solskjaer nothing has fazed him. He takes every appearance as they come and looks lethal in front of goal.

The manager may even hold off on buying a centre-forward this summer – to ensure that other areas are addressed first — and push Greenwood on again next season with more game time.

I’m not suggesting that Greenwood is ready to be a regular in the starting eleven — but every season now he should be playing more games, and he’s not doing too bad at the moment racking up 25 appearances in the Premier League.