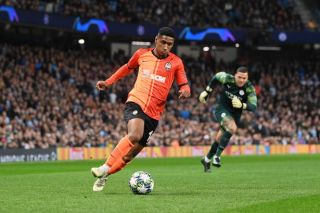 Shakhtar Donetsk right-winger Tete has revealed his dream of playing for Manchester United, Liverpool or Barcelona at some point of his career.

“Three clubs are part of my dream in Europe: Barcelona, Manchester United and Liverpool. Gigantic clubs with fantastic managers and an incredible number of trophies. As a player, I dream of winning important titles and those clubs are incredible options to achieve that,” he told Esporte Interativo (via GOAL).

“I know United and Liverpool are rivals. But, if the moment of choosing of them actually came about I would have to choose wisely.”

Talk about putting your name in the transfer market.

Shakhtar Donetsk take a lot of South American footballers to Europe and it is seen as a stepping stone club for talents from Brazil and other countries to show their ability on the European stage.

The 20-year-old joined Fred’s former club from Gremio in February 2019 and has scored nine goals as well as registering seven assists in 36 appearances for the Ukrainian side since then.

And he’s clearly looking for a move to the Premier League, stating that his skill-set is better suited to the English top-flight despite naming La Liga as one of his preferred destinations.

“The Premier League is an extraordinary competition, the game is played at a great pace, there are lots of great managers and great clubs,” he added.

“I feel the players have more creative freedom there. That’s the different amongst Europe’s biggest leagues.”

This season, Tete has scored five goals and provided four assists in 26 outings for Shakhtar, including one against Man City in the Champions League.

I’m certainly not going to claim to know anything about the player — since I’ve never seen him play — but his stats aren’t bad for a young player new to European football.

He’s clearly crying out for a move to the Premier League and by naming the UK’s two biggest clubs his quotes are bound to reach the biggest publications, so it’s a win for Tete from a PR point of view.

Moreover, who doesn’t dream of playing for the biggest clubs in the world?