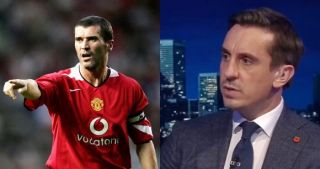 Sky Sports’ The Football Show is giving us a fix of footy chat at the moment, with all pundits staying in their homes rather than travelling to the studio.

Kelly Cates hosted the show this morning and was joined by Gary Neville and Graeme Souness, who know what it takes to captain the biggest clubs in England.

Cates asks Souness first about why he thinks he was made captain.

And as one of the most successful captains in Liverpool’s history, the Scot explained what it takes to be a leader on the pitch.

Then Neville recalls taking over the Manchester United captaincy from Roy Keane and why the thinks he was selected while also touching on how he nearly gave it up!

Nev had Keane as his captain for 10-years at Old Trafford — and he had already felt the influence of Steve Bruce and Bryan Robson as a youngster coming into the first team.

“Roy was the most influential person I ever saw on a football field,” Neville told Sky Sports.

“It was a changing landscape in football…”@GNev2 recalls taking over the #MUFC captaincy from Roy Keane, why he thinks he was selected and how he nearly gave it up…🔴© pic.twitter.com/dWcJoW1EyV

At the time, Ryan Giggs was in and out of the team as Sir Alex Ferguson rotated his team, and that’s why Neville believes he got the nod over the Welshman.