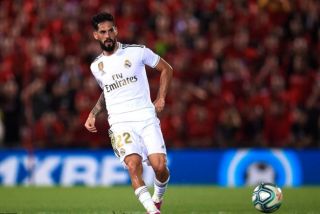 With the news that Real Madrid are willing to part ways with three of their world-class stars, Manchester United may look to take advantage and strengthen their squad ahead of next season.

Don Balon have reported that in order for Zinedine Zidane to bring in either Paul Pogba or Ajax’s Donny van de Beek, they need to make room by selling. The report adds that Isco, Luka Madrid and James Rodriquez will be scarified as a result.

Pogba is bound to cost more than the Dutchman in question, and Madrid may look at that as a push factor away from the France World Cup winner considering that he has missed a lot of football this term with injury, added by the fact his agent Mino Raiola causes so much negative publicity with his outspoken ways…

In an ideal world, Zidane would sign both midfielders, report Don Balon, but in the midst of a financial crisis that’s not going to happen.

There will still be plenty of transfer betting markets for football fans to explore, testing their media of preference’s credibility, and you may as well take up the William Hill promo code to make gambling less straining on the wallet. There will still be players coming and going this summer, as long as the transfer window goes ahead, and we expect quite a few names to leave Old Trafford.

If the season resumes Real Madrid know they are behind Barcelona in the race for the La Liga title and with one foot out of the Champions League, Zidane runs the risk of ending the season with only the Spanish Super Cup to show for their troubles.

Shortcomings this season could see club president, Florentino Perez, dive into the market for some big signings and either Pogba or Van de Beek would excite supporters.

United may look at this and consider the players Madrid want to sell.

Modric would have been a good signing a couple of seasons ago, but at 34-years-old I can’t see Ole Gunnar Solskjaer launching a pursuit for the Croatian midfielder. He’s past his best and the Norwegian is trying to build a squad with young hungry players.

Then there’s James Rodriquez, who has been offered around Europe for years, and United are better off trying to sign Jack Grealish or even James Maddison.

The only player out of this list I’d at least consider is Isco but anyone that watches Spanish football will tell you he’s not always been a favourite with certain managers. Solskjaer will need to be convinced that any potential signing wants to play for United, and not just join to build their own personal brands, like other players have been accused of doing in the past.