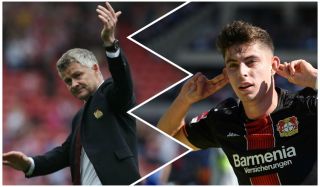 Coveted playmaker Kai Havertz has dropped a huge hint over his future – and it should have Manchester United on red alert.

The 20-year-old midfielder has all but admitted he is ready to leave Bayern Leverkusen as he seeks the next challenge in his career.

Havertz remains content in Germany but is excited by a potential move abroad in the future.

“I’m ready to take a big step, and I like challenges. For me, this also includes abroad,” he told SportBild, as sourced by Manchester Evening News.

“Leverkusen are a great club, I feel good. I have always said that. But, of course, I want to take the next step in my career at some point. That’s my ambition.”

Havertz is seen as one of the brightest talents in the Bundesliga alongside reported prime United target Jadon Sancho.

He has been in fine form for Leverkusen this term after bursting onto the scene last season with a fantastic 17 league goals.

Ole Gunnar Solskjaer is focusing his rebuild around young, exciting talent and Havertz represents the kind of player the Norwegian is trying to attract to Old Trafford.

With the youngster flirting with a move, Solskjaer should be monitoring his future regardless of other interest in the likes of Jack Grealish.

Havertz is a goalscoring midfielder who can also operate effectively cutting in from the right-flank. He is another counter attacking threat and could improve United in transition alongside Bruno Fernandes with his accuracy in possession.

However, United would not be the only elite European club after Havertz’ signature. According to the Metro, Liverpool and Real Madrid have already registered an interest in the player.