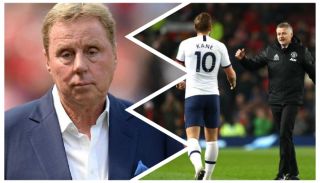 Former Tottenham Hotspur manager Harry Redknapp has stated that Harry Kane would be a good fit at Manchester United — but explained how it wouldn’t mark a big upgrade in his career.

“He’s the best centre-forward certainly in the Premier League and of his type I don’t think there’s a better centre forward anywhere,” Redknapp said on TalkSPORT, as quoted by The Independent.

He also touched on Kane being sold by Spurs, as long as manager José Mourinho decided to allow his star striker to leave.

“But at the moment he belongs to Tottenham, and unless Jose Mourinho and Daniel Levy decide to cash in if it’s a crazy offer and rebuild the team with that money, unless Jose says, ‘I’ve got three players here we can sign and build a better team with’, then I’m sure he’ll stay at Tottenham.”

While Levy isn’t interested in selling Kane to any Premier League, as per Sky Sports, it will be interesting to see how the player responds when the transfer window reopens.

He will want to see Spurs chase better players and refresh their squad. Something they should have done with Mauricio Pochettino rather than firing the Argentine to replace him with Mourinho.

Kane has netted 17 goals across all competitions this season and has been injured since January, but he could return if the current football campaign resumes.

With four years still left to run on his current contract at Spurs, Kane may have to kick up a fuss if he wants to join United, and we are a that appears to be moving in the right direction under Ole Gunnar Solskjaer.

For a team that reached the Champions League final a year ago they’ve really nosedived.