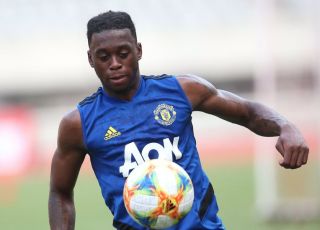 This was a surprise admission for supporters, who have not seen the right-back troubled by Sterling once this season.

But in truth, Wan-Bissaka usually remains flawless defensively regardless of his opponent in a one-on-one battle.

Wan-Bissaka has also been asked his most challenging United attacker to come up against in training. The 22-year-old named Marcus Rashford and explained how the England international has helped improve his game.

“When I first joined United and came up against him in training, he was doing things that I just really didn’t expect.

“I thought he’d go a certain way and he’d go the other way, or I thought he was about to do one thing and he did another, so he’s really tricky to play against. I enjoy that though; it’s been really good for my own development to test myself against him and the other attackers we have at the club.”

Rashford has improved immensely after becoming comfortable in the inside left role in Ole Gunnar Solskjaer’s fluid attacking setup. The width when United transition into attack allows him to run directly at defenders where he is most dangerous.

Before his back injury in January, Rashford was in contention for the Premier League golden boot with an impressive return of 14 goals in 22 games.

We hope he can replicate this form when football does eventually return amid the coronavirus pandemic.

Meanwhile, Wan-Bissaka v Rashford is a fantastic training battle and we’d love to see who gets the upper hand!