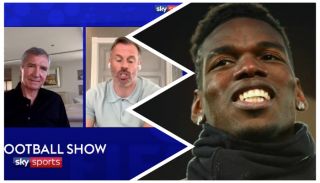 Former Liverpool midfielder Graeme Souness has challenged Paul Pogba to ‘put his medals on the table’ after the Manchester United star claimed he had never heard of the Scot.

Souness has repeatedly criticised Pogba ever since his £89m transfer back to Old Trafford in 2016 — frequently referencing the former Juve midfielder in his analysis even when he wasn’t playing, as was the case for much of this season.

There has been jibes made towards Pogba over his haircuts, fashion sense and dancing. It would be fair to say Souness became a running joke among football supporters.

Pogba was asked about his critics on United’s official podcast (Spotify), saying: “I didn’t even know who he was, really.

“I didn’t even know who he was. I heard he was a great player and stuff like that. I know the face but the name [no]. Like I said, I’m not someone that watches a lot of [punditry].

“I watch a lot of football but I don’t stay after the game to listen to what they say about why they did this or why they did that. I like to focus on football.”

The Frenchman’s comments were brought up by Carragher on Sky Sports’ The Football Show on Tuesday and put to Souness — and he had a typically blunt response.

“Well I was listening to [reporter Patrick Davison] and I was wondering if he’d have the courage to actually bring up this story,” said Carragher (quotes from The Metro).

“There’s been a story about Paul Pogba this morning and the interesting thing about it is we’re quite critical of Paul Pogba.

“I think when you’re a player you have to be respectful certainly of certain players with certain opinions at different times and at times you have to take that criticism on the chin.

“So to come out and say he’d never heard of Graeme Souness I thought really was below the belt.”

Speaking of below the belt, how’s this?

Anyhow, Souness replied: “Maybe he could try an English newspaper. I’m happy with that.”

Presenter Dave Jones jumped in, saying: “Graeme can show him the medals.”

Souness agreed: “That’s exactly that. You know the oldest saying in football comes go mind: Put your medals on the table. I’ve got a big table.”

"Graeme can show him the medals!" 🏅

While Souness enjoyed an illustrious career, this ‘saying’ doesn’t quite water when you put it to Pogba, considering he won four successive Serie A titles at Juventus and the World Cup with France.

Perhaps Souness should take a look at those English newspapers he was bold enough to recommend.