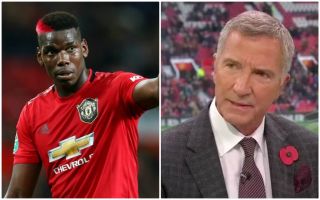 Paul Pogba has hit back at long-term critic and ultimate annoyance Graeme Souness by declaring he didn’t know who the former Liverpool midfield was.

The Scot has repeatedly criticised Pogba since his £89m return to Old Trafford in 2016 and the frequency of his condemnation has become somewhat of a running joke with supporters on social media.

Pogba has managed just two appearances since September but Souness has reportedly aimed digs at the Frenchman. He’s even criticised his performances, attitude, HAIRCUTS, DANCING and his clothing taste.

Now, for a moment, let’s look at Souness’ job as a football pundit on Sky. Why is he talking about haircuts, dancing and clothing tastes?

The 27-year-old is known for being laid back but even he has been angered by Souness’ non-stop attacks and he took a diff at the Scot by claiming he didn’t know who the former Rangers manager was.

Pogba has spilled some beans on the United podcast, saying (via GOAL), “I didn’t even know who [Souness] was.

“I heard he was a great player and stuff like that. I don’t know the face but the name [I do].

“Like I said I’m not someone that watches a lot of [punditry], I watch a lot of football but I don’t stay after the game to listen to what they say about ‘Why they did this’ or ‘why they did that’.

Earlier in the podcast, Pogba was asked more generally about his critics, which have stepped up a notch in the last even though he hasn’t played much football.

The World Cup winner took criticism for going to Paris during his recovery from an ankle injury, but he tries not to pay attention to what others (the press) have to say.

“I guess they miss me, I don’t know? I’m not someone that looks at always at Sky News,” he said.

“After the games, when I watch it again I watch the game, not the comments. When you know football, you don’t need someone to tell you what’s happening.

“Obviously what I hear when people are saying ‘Paul is going this… Paul… Paul’ I don’t know,. ‘One day maybe I will meet them [the critics] and ask them because I really want to know why.

“I am used to it now. I am really used to it, it doesn’t bother me. It’s good to hear good stuff instead of bad stuff but when you play football, you know yourself. It’s what your manager and team-mates want, the rest is just talk. It’s selling stuff I think.”

I think everyone has questioned Pogba this season and I can’t get him a full defence when he allowed his agent, Mino Raiola, to publicly slam Ole Gunnar Solskjaer.

That left a bad taste in my mouth – but Souness definitely has a bigger issue with Pogba. It’s weird.