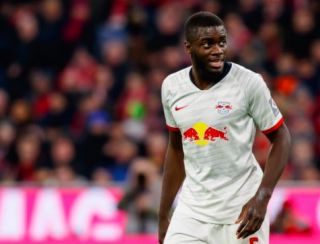 As reported by Sky Sports, has been identified by Ole Gunnar Solskjaer as a transfer target this summer as he looks to bolster his defensive options.

The France u21 international is considered one of the most promising young defenders in European football, and has just one season remaining on his contract at Leipzig.

German rivals Bayern Munich and leading Spanish clubs are also said to be monitoring Upamecano, who has a £52.5m release clause in his contract.

United have been heavily linked with a move for Napoli’s Kalidou Koulibaly, who is a premium defensive option. But at 21, Upamecano represents the future and could be an exciting proposition for Solskjaer in his long-term rebuild.

The signing of Upamecano would be a huge coup for the Norwegian ahead of some of Europe’s most elite clubs.

But the United manager is currently stacked with a plethora of central defenders and needs a clear-out before focusing on a new addition at the back.

We looked at the future of three central defenders that need to be resolved at the club this summer.

Surely this is finally the summer where Jones moves on to his next club. The injury-hit defender has made just eight appearances under Solskjaer this season, and was failing to even make math day squads before the coronavirus pandemic indefinitely suspended football.

According to the Mirror, Newcastle are willing to give the 28-year-old a Premier League lifeline this summer with Steve Bruce interested in bringing him to St James’ Park.

But Jones is contracted to United until 2023 and the stumbling block is likely to be his wages. Solskjaer needs to sell Jones in order to gain space in the squad for a player of Upamecano’s quality.

Similarly to Jones, Rojo does not have a future at Old Trafford. There is no reason for the Argentinian to return to Manchester after his loan spell at Estudiantes expires. We can see the erratic centre-back completing a permanent move back to his homeland when the transfer window opens. Unfortunately for Rojo, he has fallen behind Maguire, Lindelof, Tuanzebe and Bailly in Solskjaer’s defensive pecking order.

Smalling is an interesting one. Solskjaer has a dilemma as to what to do with the Englishman as he has excelled during his season-long loan spell at Roma. As noted by Laurie Whitwell at the Athletic, the Italian giants are keen on making the move for Smalling permanent at the end of the season. Solskjaer may want him to return to Manchester and fight for his place next season, meaning there would be no room in the squad for Upamecano who would demand game time despite his young age. But the club should not stand in his way if he expresses a desire to leave Old Trafford and the right fee is offered.

Solskjaer currently has too many central defenders on the wage books to sign the talented Upamecano. The Reds more urgently require a striker and right-winger this summer. But offloading some of the defenders surplus to requirement and bringing in Upamecano would be a huge step in accelerating his United rebuild.