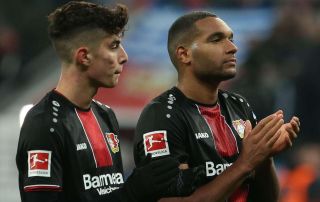 Bayer Leverkusen midfielder Kai Havertz is one of the hottest properties in European football at the moment.

There’s a lot of speculation about transfers at the moment but the financial crisis to follow the COVID-19 pandemic will restrict spending for a lot of football clubs.

For instance, talk of Harry Kane being sold for £200m is complete and utter rubbish.

Surely, he is worth a lot less now, and nobody will be spending that amount of any player this summer.

The likes of Jadon Sancho, Timo Werner and Kai Havertz may go for significantly less than what’s being touted in the media, even if they clubs want to pretend otherwise.

Havertz has been linked with both Manchester United and Liverpool, as per The Metro, but he has a pretty big weakness according to one of his team-mates at Bayer Leverkusen.

“So, the one who never wants to do weight training or anything like that is Kai Havertz,” Jonathan Tah told GOAL. “It’s always funny when we all go into the weight room. He just wants to have the ball at his feet. He doesn’t want to do strength training.”

At just 20-years-old, Havertz is seen as one of the Bundesliga’s best players, and is already part of the Germany national team.

Goal note his output of 20 goals and seven assists last season, followed by 10 goals and eight assists in the current campaign which has been halted over the coronavirus pandemic.

He can play a number of attacking positions across midfield and certainly looks beyond his tender years, which is rare for a 20-year-old and we know how Ole Gunnar Solskjaer is always on the lookout for fresh talent.

Both United and Liverpool would benefit from signing Havertz, but they will be looking at a potential move with transfer fees in mind.

Havertz needs to address his situation with the gym if he is to join a Premier League club – a lot of footballers talk about the English league being quicker and more physical than other leagues.

Moreover, United could end up with Jack Grealish for a cut of the price it would take to sign the Germany international, especially if Aston Villa are relegated if the season ever resumes.