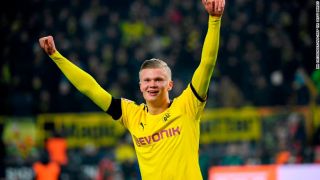 Manchester United and other potential suitors for Borussia Dortmund striker Erling Haaland will have to wait a little longer before attempting to meet his buyout clause.

Despite the Evening Standard recently linking the Norwegian star as a top target for Man United, it seems Dortmund hold all the cards in negotiations — and it doesn’t sound as easy as previous reports suggest, after whispers emerged that United pulled out of negotiations because of such demands set by agent Mino Raiola.

That is because, according to Bild, as translated by ESPN, his release cause does not become active until 2022.

Then United or other interested clubs will be granted an opportunity to pay €75m for Haaland’s services, but now they would expect more than double that for his signature!

Haaland initially attracted interest from United before he joined BVB.

He has enjoyed a superb season for both BVB and previous club Red Bull Salzburg of Austria.

Haaland’s transfer to BVB seems like a stop-gap move and soon he will join a bigger club.

Raiola is drooling over the sign-on fees!