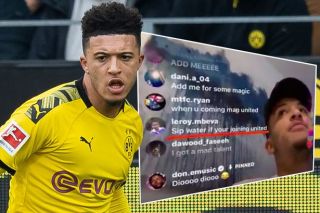 Borussia Dortmund star Jadon Sancho has been linked with a move to the Premier League in the summer transfer window, with Manchester United believed to be leading the way to sign the winger.

United fans are bound to be excited after an apparent transfer hint from the Borussia Dortmund starlet.

The Red Devils have been closely linked with the England international who seems destined to leave BVB when the transfer window reopens, as per the Daily Mail.

Sancho then promptly sipped from his bottle, though it’s unclear if he saw the message. Though that didn’t stop United fans believing he played with the idea.

This will add fuel to the gossip columns but the Evening Standard took the biscuit with their headline this morning, stating “Jadon Sancho ‘confirms’ Manchester United move with transfer hint during Instagram Live fan session’.

Nothing has been confirmed. Yet anyway.