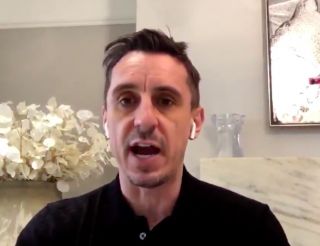 United have been known to sign some of the best homegrown Premier League players to maintain success when bringing youngsters through the academy.

And Kane is one of the most prolific forwards in Europe, so interest from Ole Gunnar Solskjaer is obvious given United’s need for a goalscoring striker.

Kane cast doubt over his future with recent comments expressing his willingness to leave Tottenham if they do not meet his ambitions.

While he has achieved great individual success, his career will be ultimately be defined by silverware as well as his goals. He may feel it is case of ‘now or never’ in making a huge switch to a club that is showing greater ambition in Solskjaer’s revolution.

The England captain is contracted to Spurs until 2024 and it would take an extraordinary transfer fee to complete a deal for the 26-year-old.

But according to a report in the Daily Mail on Sunday, chairman Daniel Levy is willing to sanction a transfer for around £200m.

United great Gary Neville thinks Kane could be the perfect signing for the Reds.

“There are some signings that are like gold, where you just know they are going to work. Harry Kane is unbreakable in the sense of his mentality. He’ll always score goals, will always give 100 per cent in training, and is completely reliable as a manager would want.

“For Manchester United, it would be a perfect signing in terms of what they need,” he explained. “They had Bruno Fernandes come in and he’s done a great job, Harry Maguire at the back. If they can get someone like Kane up front, you’re looking at a fantastic spine.”

Listen to Neville’s verdict below on the Sky Football Show.

Does Harry Kane fit the profile of a Manchester United signing? 🔴@GNev2 discusses the possibility on the #SkyFootballShow – watch live on Sky Sports Premier League now!pic.twitter.com/nOGL3MrH1G