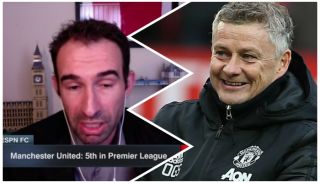 ESPN FC’s Craig Burnley and ex-Manchester United player Danny Higginbotham break down our squad and debate how far the club is from competing for the Premier League title.

Burnley states that United are “a good half a dozen players” away from challenging the likes of Liverpool and Man City.

But Higginbotham says rightly City’s future is uncertain with the UEFA ban and cites our improvement under Ole Gunnar Solskjaer as reason to believe the team is heading in the right direction and can compete for the league with a few signings.

Of course, Burnley disagrees and puts City’s dip in form down to injuries, completely forgetting that United have missed Paul Pogba (our best player last season) and have had long-term injuries to Anthony Martial, Marcus Rashford and Scott McTominay.

There’s no bias in Higginbotham’s analysis here, like Burnley suggests, and he might be right about the 2-3 proper players who could come in and lift this side like Bruno Fernandes has done since January.

Watch the video below via ESPN FC: