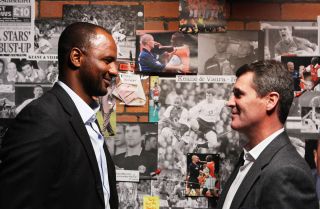 Former Manchester United defender Mikael Silvestre has given his verdict on who would win a boxing match between Roy Keane and Patrick Vieira.

The pair had an infamous scuffle in a game between United and Arsenal in 2005, in which a tunnel spat saw Keane tell Vieira ‘he’ll see him out there’.

The French midfielder and Arsenal captain was trying to throw his weight around in order to intimidate Gary Neville and Keane, as a brilliant captain, wasn’t having any of it!

Speaking on that subject and who would’ve won had a proper fight broken out, Silvestre told the Talk of the Devils podcast (via The Athletic): “It’s a small tunnels, players are shoulder to shoulder, and I think Patrick went past Gary and he said ‘you have a big mouth when you are with your team so I want to take you on 1v1 outside, me and you.’

“Maybe because we did some boxing Roy would have an advantage. We had a fitness coach that came in my third season at United and he was good at lifting and also boxing, Mike Clegg.

“With Mike we would do some boxing so Roy was pretty good at it, [Ryan] Giggsy and then Wayne [Rooney]. A lot of the players would enjoy making a one minute round, two, three rounds after training, it’s good for upper body and coordination.”

Picture the scene at Carrington as Keane challenges team-mates to a fight, all running in completely different directions to get away from the Corkman.

Along with Vieira, the pair built the reputation for being fierce rivals back when the rivalry between the two sides was at its peak.

While they never did come to major blows, or fisty-cuffs even, we fancy Keane to strike the knockout punch every time.