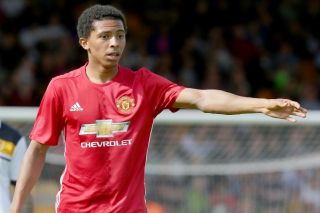 Devonte Redmond played in the same youth team as Marcus Rashford and Axel Tuanzebe, but found out about his release in the cruellest fashion after not reaching the levels required.

It’s a dream for many footballers to come through the youth system at Manchester United. Redmond did this much but couldn’t live his fantasy of playing in front of a full Old Trafford.

While its part and parcel with youth football — lads being left go — United definitely could have done better by at least reaching out to the player and his family before making the announcement.

Speaking to The Athletic about being released, he said: “I looked at my phone. All of a sudden I’d got loads of notifications on Twitter. ‘All the best’ – lots of messages like that. It was really strange.

“But then I saw the reason why all these messages were being sent. There was a list of all the lads that United had let go.

“It had been posted on Twitter and it was the official ‘retained and released’ list. And that was how I found.”

After joining United as an eight-year-old, Redmond went on to spent 13 years at the club. It goes without saying that he deserved a better send off.

“I tried not to panic at first. I rang my dad and it was the first time he had heard about it, too. ‘It’s obviously not been done in the right way,’ he said. ‘Try to keep your head,’ he said.

“He’s quite a calming person, so I listened to him. I don’t think it sunk in straight away. It was later, probably after a couple of weeks, that I started to panic.”

Fortunately, Redmond managed to get his career back on track after departing United. He’s currently playing for National League side Wrexham FC, who he joined from Salford City.

We understand why he’d be dishearten at the manner United let him go.