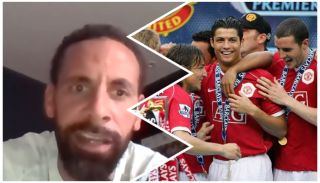 Manchester United players could not believe what they had seen after playing against Sporting Lisbon in a pre-season friendly in 2003.

It was clear that one Sporting player had caught their attention and Sir Alex Ferguson acted quickly.

That was Cristiano Ronaldo and he would soon move to Old Trafford and become one of the game’s greatest ever players.

During his time in Manchester, Ronaldo played alongside some greats of the game including Wayne Rooney, Roy Keane and Rio Ferdinand. The latter captained the side to the 2008 Champions League title, which was the first of Ronaldo’s five — later winning four with Real Madrid.

“We played against Sporting Lisbon to open their stadium,” Ferdinand said.

“I played and it’s a funny story because John O’Shea played right-back against him and we didn’t know who Ronaldo was.

“We missed out on signing Ronaldinho so we were a bit deflated at the time. So we get in at half-time and John O’Shea must have had an oxygen tank next to him. He was in bits. He was sitting there [demonstrates heavy panting].

“We said. ‘Sheasy, get close to him!’ And he just couldn’t even answer us.

“And, to be fair, me, Butty and Scholesy were going, ‘Mate, this kid is unbelievable, we’ve got to sign him.’ We got onto the coach and we’re delayed by about ah hour and a half and everyone’s going: ‘What’s going on? We’ve got to get back to England’ and they were doing the deal upstairs to try and sign him.

“It was a mad performance and you saw straight away that will be a world’s best player.”

Ferdinand added that Ronaldo was the first player he saw build a team around himself.

“He was the first player I ever saw who built a team around himself — a nutritionist, his own physio.

“He lived next door to me so I would go to his house sometimes and I’d go, ‘Bruv, what are all these people doing in your house? Are you not gonna relax?’

“He says, ‘That’s my physio, that’s my sports scientist, that’s my masseuse’ and I’m thinking: ‘Jesus, this guy is nuts!’ He was investing the money in himself because he knew.”

Everyone looks back at Ronaldo’s dedication and hard work from his earlier days. It explains his obsession with winning and improving his game.