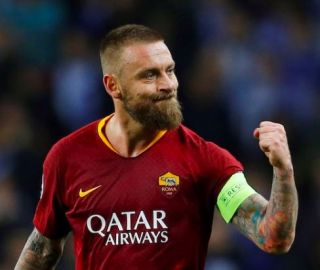 Roma great Daniele De Rossi has revealed that he once turned down the chance to sign for Manchester United.

The 36-year-old retired in January after spending the bulk of his incredible career in Rome where he achieved legendary status.

De Rossi explained that a move to Old Trafford was actually on the cards when Sir Alex Ferguson was in charge, but decided against the switch because of two special midfielders that were already there.

“Since I was a child I have loved United,” De Rossi told Sky Sports Italy, as quoted by the Daily Mail.

“It was the right choice that I didn’t go to Manchester because there was Keane and Scholes, incredible players.”

The 2006 World Cup winner could have joined United at a time the club was fielding arguably the best midfield pairing the Premier League has ever seen.

Keane captained United to the famous Treble in 1999 and Scholes amassed 11 titles during his time at the club.

It’s such a shame that De Rossi never signed for United now we have heard it was a distinct possibility. The former Italian international embodied the perfect central defensive midfield and could have been the ideal long-term replacement for Keane when he departed.

De Rossi also outlined his plans to become a coach after ending his career at Boca Juniors.

“I would like to coach Roma, but first I have to become a coach and to do it there is a growth path that all young coaches need.

“In a few days I became from an old footballer to a young coach, I see things with a relaxation that you cannot afford as a footballer.

“I’d like to sit on that bench, but I’m in no hurry to make it happen tomorrow. I presume I hope it will happen: it will happen if I have become a good coach and not because I have been a very important player for Roma.”