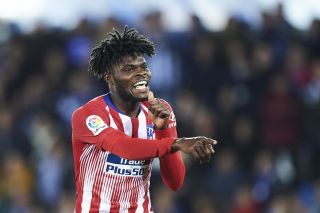 The Ghanian has been linked with a move to Old Trafford before and now his contract uncertainty has drawn even more speculation over his future.

Partey’s current deal at the Wanda Metropolitano expires in 2023 and it is said to include a €50m release clause.

Apparently he’s been in talks with Atleti for months but the parties involved have yet to come to an agreement — which potentially opens the door to clubs like United who may be interested in a defensive midfielder of his quality when the transfer window reopens.

We’re sure a number of clubs would be keen to trigger his release clause in the summer and, for that reason, Diego Costa is likely to be sweating under the collar.

If Paul Pogba leaves Manchester United this summer, then I hope we spend the money wisely like Liverpool did with Philippe Coutinho. For me, I’d use the money to sign Thomas Partey (£45m release clause) & Jack Grealish (£50m).

He is the Argentine’s first-choice pivot and can also play in attacking midfield.

Even though his future has remained uncertain for much of the season, prior to being halted by the coronavirus pandemic, the 26-year-old has been in excellent form for the La Liga club.

The Spanish report has been cited by The Mirror.