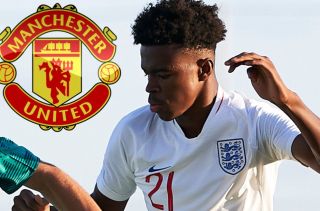 Manchester United and Liverpool are among the clubs who are keeping tabs on Aston Villa rising star Carney Chukwuemeka, The Athletic’s Gregg Evans reports.

The 16-year-old has been promoted to the under-23s recently after impressing for Villa’s under-18s.

Villa CEO Christian Purslow recently dubbed Chukwuemeka as “probably the best 16-year-old in England right now,” so you can see why clubs like United would be linked with a move for him in the future.

The report claims the teenager can be deployed in any central midfield roles, ideally as a box-to-box No.8.

“He’s the best player Villa have got coming through,” a scout told The Athletic. “He can do everything in the midfield area and there are a lot of clubs monitoring his situation at Villa.”

He’s currently on scholarship terms at Villa until his 17th birthday and the club’s objective is to keep him.

Talks over his future are expected to take place in the summer but if they fail to reach an agreement, it sounds like there won’t be a shortage of suitors trying to land the youngster.

A return to the Championship will result in Villa losing some first-team players too, but perhaps that may be a route into the senior team for Chukwuemeka, which would be huge for his development as a rising star.

They clearly rate him highly at Villa so we’ll have to keep a close eye on him.