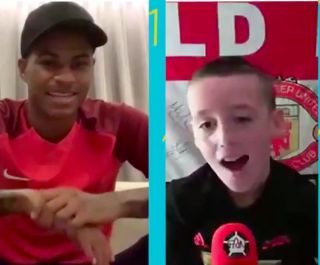 Marcus Rashford is a class act.

The Manchester United star has been making the most of his time during this unprecedented lockdown period by giving back.

Rashford knows the importance of helping the most vulnerable and has been working with FareShare to ensure hundreds of thousands of school children are being distributed food.

And the 22-year-old has also been busy keeping smiles on United fans’ faces by surprising them with video calls.

The England international has been talking to fans young and old, as he helps make memories with some of his most enthusiastic supporters.

In the video below, you will see him surprise young superfan Alex Nield who seldom misses a United game.

Rashford is grounded and understands the impact someone of his status can have on those struggling during these difficult times.

He is turning into a fantastic role model for United’s academy players as well as youngsters across the country.