Sky Sports users have named their Premier League team of the season so far – but only one player in Ole Gunnar Solskjaer’s squad is included.

Captain Harry Maguire is selected alongside Virgil Van Dijk at centre-back, in a team unsurprisingly dominated by Liverpool. Maguire is the leader United have been missing at the heart of their defence and has made an instant impact at Old Trafford.

The only other Manchester United player selected in the team, determined from votes of 50,000 people, is Dean Henderson.

Henderson is deservedly in between the sticks after another exceptional loan spell at Sheffield United. The 23-year-old has been imperative to Chris Wilder’s side’s remarkable rise to sixth place in the league and may well have been Gareth Southgate’s England number one at the European Championships this summer.

Manchester United are on course for their worst points total in Premier League history – so it’s understandable that only one current player makes the XI.

However, we feel two youngsters were perhaps unlucky not to feature.

Aaron Wan-Bissaka has had a fantastic first season in a United shirt and has finally solved the long-standing right-back issue at Old Trafford. The 22-year-old is seldom beaten in a one-on-one situation and is starting to improve in attacking areas. However, he rightly misses out to Trent Alexander-Arnold who has established himself as the best attacking full-back in world football.

We also feel injury restricted Marcus Rashford’s chances of selection this team. Rashford has been United’s best player this term, but was ruled out with a double stress fracture in his back in January. He has found his home in the inside left channel under Solskjaer this term, netting 14 times and contributing a further four assists in 22 league appearances.

Rashford had a realistic chance of winning the Golden boot this season if he had avoided injury and the games were completed.

But it was always going to be difficult to oust a front three of top scorer Jamie Vardy, Pierre-Emerick Aubameyang and arguably the best player of the season in Sadio Mane.

See the Sky Sports team below: 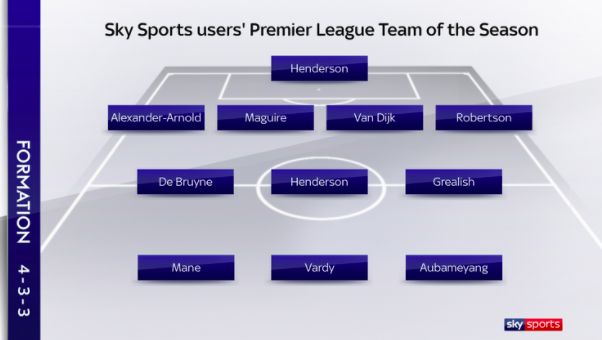