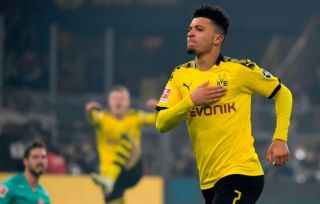 It seems like every day there’s an update on Jadon Sancho who looks destined to leave Borussia Dortmund when the transfer window reopens.

According to The Athletic, the winger is ‘very open’ to a move to Old Trafford which will see him return to Manchester, a city he knows well from his time at Man City.

There has been reported interested from elsewhere — including Premier League rivals Liverpool and Chelsea — but Dortmund will demand a huge transfer fee for Sancho, and he’ll likely become United’s most expensive signing.

As far as the media goes, it’s been quite on the Sancho to Liverpool front the past while, with the Liverpool Echo suggesting that they see Valencia’s Ferran Torres as an alternative to the England international.

Chelsea, on the other hand, and a pre-arranged agreement to sign Ajax winger Hakim Ziyech so I can’t see them flogging over £100m for Sancho who plays in the same position.

The report adds that United’s finances are still in a very good place, which also suggests they could ‘exploit’ the transfer market’s vulnerable situation because of the coronavirus pandemic.

Marcus Rashford is said to be friendly with Sancho, so you can be sure they’re all in lockdown communicating with one another about their foreseeable plans.

Hopefully Sancho will be a United player in the coming months.