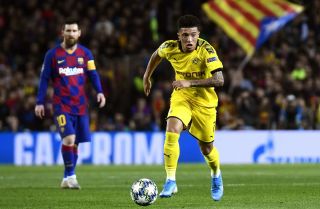 Manchester United’s hopes of signing Borussia Dortmund winter Jadon Sancho have been given a blow as the player’s entourage reportedly have advised the England international against a Premier League return.

According to Tom Roddy of The Times, those close to the 19-year-old think he will have a better chance of winning the Ballon d’Or by playing with either Real Madrid or Barcelona.

As per the report, the same advice “was recently given to Sancho’s father by lifelong family friends.”

The winger left Man City to join Dortmund in 2017. He has since established himself among Europe’s best players, and now the Red Devils want to sign him.

United are said to be leading the race for Sancho, but there has also been linked to Chelsea and Liverpool in recent times. His exit from Dortmund is “inevitable,” says Roddy before adding that the player’s “childhood friends believe Sancho will return to the Premier League.”

With 31 goals and 42 assists in 90 appearances for Sancho since he joined Dortmund, it is thought that he could cost over £100m this summer.

Moreover, Sancho has been told by teammate Marco Reus to remain in Germany a snub a transfer back to the Premier League.

“He should stay one more, maybe two years at Dortmund. In my view, there is currently nothing better for him,” Reus told SportBild.

“Then he can take the really big step. As an even more complete player who can continue to develop with us as a regular in the team.”

Prior to the Bundesliga and the rest of football being suspended amid the COVID-19 pandemic, Sancho showed blistering form for Dortmund this term — scoring 14, and assisting 16 times.

Borussia Dortmund’s CEO Hans-Joachim Witzke spoke recently insisting they will ‘respect the wishes’ of Sancho, as quoted by The Standard.

“I’ll say clearly that even the very rich clubs shouldn’t believe that they can come here to snap up bargains. We don’t have to sell anyone for less than they’re worth.”