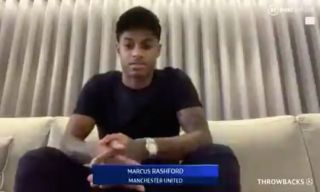 Marcus Rashford has opened up on the difficulties the Premier League players have faced while setting up the #PlayersTogether initiative.

This has been arranged to generate funds for the fight against COVID-19 with the NHS under lots of pressure in the United Kingdom.

“For us we want to help in the best way possible, getting the money to the right places in a massive thing,” the striker told BT Sport.

“It took a lot of time, a lot of conversations between the players. We came to a decision that this was the best way to do it, the club have supported that so everyone’s happy.

“There’s been plenty of occasions, for me personally, when you’ve tried to help but you’ve not helped in the best way possible and you can get backlash for that.

“We wanted to take our time with the decision, and we did that and thankfully we’ve done the right thing.

“It’s been tough honestly. From the beginning, we always wanted to help, but getting it to this stage has been difficult.”

Rashford went on to praise club captain Harry Maguire for his role in all of this.

“Harry Maguire has played a massive part in relaying the information, letting us have our say and reporting it back to the authorities,” he added.

“That’s the best way to do it. In terms of self-satisfaction and doing a good thing to help the cause it’s the best thing to do. But it wasn’t easy.”

"For us, we want to help in the best way possible and getting money to the right places is a massive thing."@MarcusRashford on how the Premier League players came together to form their collective initiative, #PlayersTogether. pic.twitter.com/lSZsl7Luf9

The figures in the UK are frightening.

It’s great that the United players have come together — with footballers from other Premier League clubs — to fight this war.