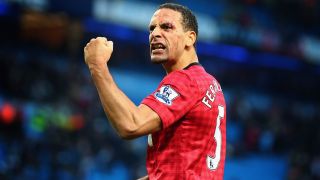 Manchester United legend Rio Ferdinand has revealed that he was “close” to joining Barcelona in 2008 after speaking to boss Frank Rijkaard.

Ferdinand has just captained United to a scoreless draw in the first leg of their Champions League semi-final at the Camp Nou when the he learned about the Dutchman’s intentions as Barça manager.

Ferdinand, 41, opens up on how close he was to leaving United for Barcelona in 2008.

“It came close. There were discussions with my agent, Barca had touched base. I’d spoken to Rijkaard, not about going there but he made his feelings known,” Ferdinand told BT Sport (via The Sun).

“The problem with me going abroad, I always said I definitely wanted to go abroad and play, but the only thing that would ever have stopped me was if I was successful on home shores and I was lucky and fortunate to find a great club in Manchester United where it was going to be almost impossible for me to leave.

“At that point Xavi, Iniesta, Messi, they weren’t the players they were three or four years later so it was a very different landscape at that time in Barcelona.”

Of course, United went on to beat Barcelona as they won the 2007/08 Champions League by beating Chelsea in the final (Moscow).

And that summer, instead of Ferdinand, it was Gerard Pique who left United to return to Barcelona, becoming one of Pep Guardiola’s first signings at Camp Nou.

Ferdinand went on to win three more Premier League titles before joining QPR on a Bosman in 2014.

He won all major trophies during his 12-years at Old Trafford, including six Premier League titles, one FA Cup, three League Cups and the Champions League.

It really is no wonder Ferdinand is renowned as being one the best English defenders to ever play the game.

He’s certainly the best I’ve seen in a United shirt.