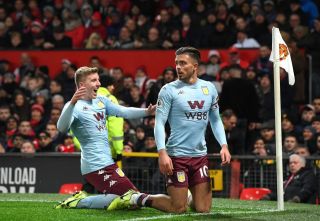 Reports claim that Everton have emerged as surprise contenders in the race to sign Aston Villa captain Jack Grealish.

Grealish is widely expected to leave his boyhood club this summer, regardless of whether he can lead them to survival when the Premier League eventually returns.

And as reported by the Evening Standard, Manchester United hope they can secure the transfer of the 24-year-old for around £60m.

He has been identified as one of Ole Gunnar Solskjaer’s leading transfer targets this summer as he looks to accelerate his rebuild.

But according to FootballInsider, Carlo Ancelotti’s Everton have a growing confidence that the can lure Grealish to Goodison Park.

Grealish has been justifiably criticised this past week after being caught ignoring government social distance guidelines as he went to a party at Ross McCormack’s house.

But that has not put off Premier League clubs coveting his signature this summer.

Everton may be an attractive proposition for Grealish given he would likely be given a prominent role in a developing side.

But surely the lure of Old Trafford would convince Grealish to move to Manchester if given the option. United would also be able to outmuscle the Merseyside club financially if any bidding war was to take place.

A versatile playmaker, Grealish could operate in behind the striker or in the inside left channel under Solskjaer next season.