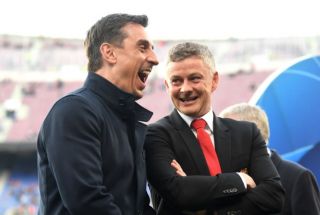 Gary Neville and Ole Gunnar Solskjaer enjoyed some wonderful moments together as teammates, and it’s clear their relationship remains strong after the Norwegian gave a funny response to Neville’s latest attempt to troll.

The Daily Express ran quotes from a recent Sky Sports podcast which the former United captain suggested Solskjaer looked like a competition winner when he first entered the United dressing room.

Interviewed earlier this week by Sky Sports’ Geoff Shreeves and Neville during a video call, Shreeves, in reference to Neville, said: “Basically, he absolutely battered you from top to bottom.”

Then United’s manager hit back, saying: “And then I battered him when we started playing football.

“[…] But what a teammate to have and I’m sure that we could have quite a few hours here talking about the fun moments we’ve had in the dressing room […] We’re just normal lads, just good at kicking a ball some of us and some of us are good at kicking ankles. Like Gaz was.”

They also lifted the lid on what life was like under Sir Alex Ferguson.

Solskjaer recalled his nervousness at joining one of the biggest clubs in the world, but how players like Nicky Butt were able to help him settle.

He famously went on to achieve European and domestic domination by scoring regularly in the Treble season (1998/99).

What a great time that was to be at United, and it undoubtedly would have shaped all of the players involved. Solskjaer may be in a managing capacity now but his hunger to win remains from those days.

What a story it would be if it was Solskjaer who brought league or European success back to Old Trafford.