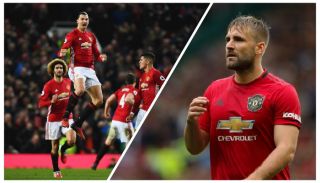 Zlatan Ibrahimovic is the Chuck Norris of football

Luke Shaw has revealed how Zlatan Ibrahimovic got the best out of everyone at Manchester United during his short spell at Old Trafford.

“He was mad. I think he was what we needed in the dressing room,” the United left-back said during the Combat Corona FIFA Twitch tournament, as cited by Goal.

“He’s unbelievable, he still had the talent and even though he was a bit older he was still the amazing player that he had been.

“But I think inside the dressing room he was great. He had a lot of jokes but I think when it got serious, and when he had to sort of put his foot down, you knew about it.

“I think he was a born winner. Even in little training games, if he didn’t win and you were on his team he would absolutely kill you.

“So I think he got the best out of everyone when he was there, as in training-wise, because people couldn’t sort of [slack] off because if you’re on his team and you lose, you’re dead.

“And honestly you can ask anyone in the team, that was the situation. But I think everyone loved him and it was just disappointing that he got that bad injury.”

José Mourinho brought Ibrahimovic to United on a free transfer from Paris Saint-Germain in 2016.

The Swede scored 29 goals in 53 appearances for United before a knee ligament injury forced his move to LA Galaxy in March 2018.

Ibrahimovic won the Carabao Cup and Europa League during his time at United, and he is still loved by the Old Trafford faithful, who would all surely be in agreement that it’s a shame he didn’t join MUFC earlier in his career.

The 38-year-old has always had a reputation for being hot-headed and it seems Shaw was able to back that up by revealing he’d even lay into teammates if he lost small-sided games.

That’s the kind of player I want in the dressing room.

Moreover, Ibrahimovic is in the headlines over having a jiu-jitsu fight with Gennaro Gattuso.

Despite being a black belt in taekwondo, his AC Milan teammate during his first spell with the Serie A club, Gattuso, thought he would take him on during training.

Gattuso was also renowned for being a fiery character himself through his aggressive playing style and confrontations, including that famous spat with Joe Jordan during Milan’s Champions League clash against Tottenham.

During an interview with Marca, another former Milan teammate, Robinho, who also played for Man City, described the clash between the two on the training ground (via Daily Record).

“One day in training he challenged Gattuso to a jiu-jitsu fight.

“Right before your eyes you had this fierce guy doing martial arts against Zlatan — who is a black belt.