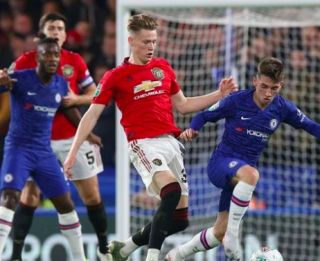 Chelsea starlet Billy Gilmour has named Manchester United youngster Scott McTominay as the best midfielder he has come up against in his fledgling career.

The 18-year-old midfielder has stepped up to Frank Lampard’s first-team squad this season and has shown his potential with several mature performances.

Gilmour started in Chelsea’s defeat to Ole Gunnar Solskjaer’s side at Stamford Bridge in the Carabao Cup in October.

In the game, Marcus Rashford scored one of the all-time great goals in the competition as the Reds triumphed 2-1.

But Gilmour was most impressed with Scott McTominay, who has established himself as an integral part of Ole Gunnar Solskjaer’s United squad this season.

When asked about the toughest opponent he has faced, he also revealed that he received a supporting text message from McTominay after the defeat.

“In game wise it has probably been Scott McTominay. Not just because he is Scottish. I found it really difficult.

“No rivalry, I don’t know him that well. After the match he did text me and said ‘just keep doing what you’re doing’. So I thought that was really nice of him.”

McTominay is not given enough credit for the presence he brings to the midfield.  Standing at around 6ft4, he is an imposing figure who can assert his authority against smaller players like Gilmour.

The 22-year-old is developing into a complete midfielder and his leadership qualities have been encouraging in a squad that is lacking experience.

McTominay has also left match going supporters with their lasting memory before the indefinite postponement of football due to the coronavirus. His goal in the final seconds against Man City at Old Trafford was a special moment.