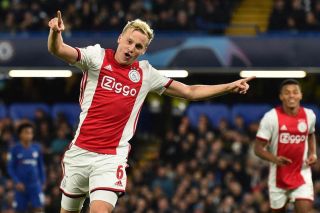 This is another player that has been strongly linked with a host of top European clubs, including Real Madrid… and Manchester United.

United’s midfield still needs to significantly improve if we are to expect title races and Champions League football year after year. Even before Sir Alex Ferguson’s retirement in 2013, our midfield wasn’t quite good enough, but we did start to see positive signs (11-games unbeaten) before matches were suspended over the coronavirus pandemic.

Mostly due to the arrival of Bruno Fernandes but we shouldn’t ignore how Fred and Matic improved significantly after the Christmas period.

It had been widely reported in the Spanish media that the youngster was set to join up with Zinedine Zidane in the capital, but he has confirmed that his options remain open.

“My feeling must be good at a club. How much do they want me?” he told Helden, as quoted by the Metro.

“But I also have to fit in with the system that is being played and of course I also want to have an overview of playing minutes. Playing in the sun is always nice. ‘But no, I certainly haven’t started taking Spanish lessons yet.

“I have not said yes to anyone, everything is still open. ‘I know what I’ve got here, I am loved in Ajax and I love Ajax.”

It’s clear that Jack Grealish and James Maddison are on United’s list of targets, but the 22-year-old Dutch sensation could be seen as an alternative if available this summer.

Van de Beek looks like a great prospect and Solskjaer is trying to build a young successful side at Old Trafford.

He will be on United’s transfer but it remains to be seen how high.

The Sun has named United as an interested club in a recent piece on Van de Beek.