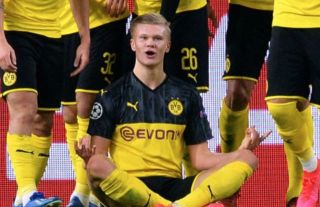 Manchester United are reportedly ready to challenge Real Madrid for the signature of Erling Haaland if the striker becomes available this summer.

Big IF, of course…

The Norwegian goalscorer only joined Borussia Dortmund in January, and it seems crazy to think that he will move on that quickly, but you never know with Mino Raiola being his agent.

Raiola is always on the lookout for the next big move and is probably hoping Haaland goes on to have a career like Swedish striker Zlatan Ibrahimovic, having conducted a number of deals with Europe’s biggest clubs, and being financially rewarded at the same time.

It was suggested when he joined Dortmund that United pulled out of talks because they would not accept having a transfer clause on his contract, which hints that’s how the Bundesliga side landed him midway through the season.

According to the Standard, United remain interested in signing the 19-year-old, who played under Ole Gunnar Solskjaer at Molde.

The report doesn’t say whether Dortmund are ready to cash in on the player they just spent £17m on (from RB Salzburg), so I don’t think we’re being told anything new to get excited over.

Just that United are still interested in Haaland and will probably keep an eye on his situation at Dortmund to see if there’s ever a change in his transfer status.

Right now, Dortmund are probably thinking about the striker’s potential transfer worth in two-years or so. They will have a plan in place.