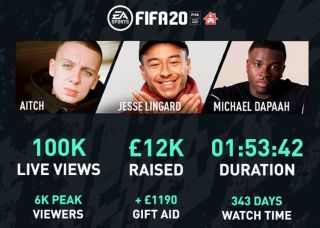 The 27-year-old Manchester United midfielder has done his bit to help the UK’s National Health Service.

Lingard, who gets a lot of stick online, is making good use of his free time during the COVID-19 lockdown, joining forces with grime artist Aitch and comedian Michael Dappah to raise money for the NHS.

He faced Aitch in a charity FIFA 20 tournament on Sunday, playing as Borussia Dortmund with the raper selecting the France national team.

It’s unclean why Dortmund was Lingard’s choice of club to play with on FIFA, but we’re sure it had something to do with taking advantage of their star player and United transfer target Jadon Sancho.

Even though the 27-year-old lost the game 1-0 after failing to score a penalty, the stream still managed to raise a massive £12,000 for the NHS.

Lingard took to Twitter after the broadcast, writing: “Thank you so much to everyone who tuned in and donated! The money raised will go straight to help such a worthy cause. Thank you again to Aitch and Michael Dapaah for letting me be apart of this!”

Thank you so much to everyone who tuned in and donated! The money raised will go straight to help such a worthy cause @NHSCharities. Thank you again to @OfficialAitch and @MichaelDapaah for letting me be apart of this! #StayHome #ProtectTheNHS 🎮⚽️👏🏾 pic.twitter.com/EROyP5xzaO

A massive kudos to Lingard and everyone involved.