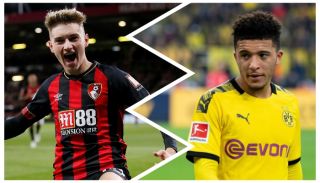 Jadon Sancho will reject a transfer to Manchester United if they do not qualify for next season’s Champions League.

That’s the latest from The Sun, who claim that the Borussia Dortmund star wants to be guaranteed Champions League football again next season — whenever he ends up.

That could put a dint in United’s plans to sign the England international, with Ole Gunnar Solskjaer’s side fifth in the Premier League as things stand, and it remains unclear if and when the remaining games of the campaign will be played due to the coronaries pandemic.

I can’t see either Liverpool or Chelsea coughing up the money required to make a transfer pursuit successful, so United are one of his few choices, if he wishes to leave Dortmund when the market reopens.

READ MORE: How Solskjaer can use Anthony Martial and Marcus Rashford to convince Jadon Sancho

Meanwhile, the same outlet reports United could be set to rekindle their interest in Bournemouth’s David Brooks.

It is claimed by The Sun that Bournemouth could be looking to sell Callum Wilson, Josh King and Brooks amid a big summer shake-up and the 22-year-old Welsh international — who has been injured for much of the season but was previously linked to United — could fit the bill.

It seems pretty convenient for The Sun to report on Brooks, given talk of such a move has died down, and it gives them something to write about now their narrative on Sancho has changed.

Nobody knows what will happen with the remainder of the season, but United definitely want it resumed as soon as possible so they don’t have issues like this in the transfer market.

United need to be in the Champions League but we still think Sancho looks more probable than Brooks to arrive before next season.