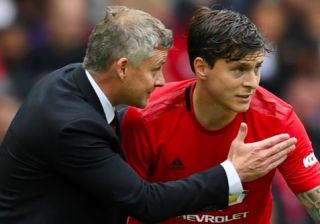 Ole Gunnar Solskjaer’s side went from shipping goals freely to becoming a tight defensive unit before the coronavirus pandemic pressed the pause button on football.

And Swedish international Lindelof, who has formed a promising central defensive partnership with new captain Harry Maguire, has credited the emergence of Wan-Bissaka and Brandon Williams.

“Of course you always try to help your team-mates and as a unit at the back everyone tries to help each other,” said Lindelof, as quoted by Manchester Evening News.

“And I think they’ve been doing well when they’ve played, Brandon has been brilliant for example. He’s been playing more on the left so Harry’s been taking care of him.

“I’ve played a bit more with Aaron and he’s been brilliant since he came here. It’s great to have our full-backs in the team and I think as a back four we can only get better and better like we said before.”

Wan-Bissaka has been excellent since his arrival from Crystal Palace this summer. The 22-year-old is near flawless defensively and is seldom beaten in a one-on-one. While he still has plenty to improve in attacking areas, he has provided the solution to United’s long-standing right-back problem.

We also feel that Wan-Bissaka could operate well in a right centre-back position if Solskjaer opts for a three at the back formation against an offensively dangerous side.

Williams, meanwhile, has enjoyed a remarkable rise to first-team prominence.

The 19-year-old was not even part of Solskjaer’s touring party for pre-season games in Australia and Asia. But he has taken his chance in the first-team after Luke Shaw’s injury early in the season and is the latest success story from United’s academy.

What is most impressive about Williams is his fearlessness and aggression against some of the best wingers in the Premier League. Williams still has plenty of developing to do, but he has shown great promise in his 25 first-team appearances this term.