Bastian Schweinsteiger has named Manchester United icon Eric Cantona as one of his childhood icons.

The German legend took part in an Instagram Q and A session on Friday that keep himself and football fans entertained during this unprecedented lockdown period.

The 35-year-old spent a disappointing two seasons at Old Trafford, where he featured in a struggling Louis Van Gaal side before being frozen out almost entirely by new boss Jose Mourinho.

His arrival came with the infamous words of the incompetent Vice-Executive Chairman Ed Woodward:

”When people see Schweinsteiger on the team sheet, that’s gonna send some shivers down the spine.”

Unfortunately, the World Cup winner could not replicate the remarkable success he had in his peak at Bayern Munich. But he is still loved by many United supporters for his attitude and commitment to the club during his time in Manchester.

And Schweinsteiger shares the same childhood football hero as many United supporters in Cantona. 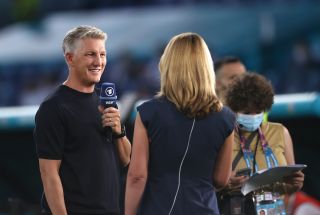 “Eric Cantona was one of my childhood idols. Great footballer,” he said, as translated by Manchester Evening News.

Cantona remains the king of Old Trafford and his legacy will live on through the chants from supporters on the terraces.

The enigmatic French genius is one of the greatest players to play for the club, and is certainly the most charismatic.