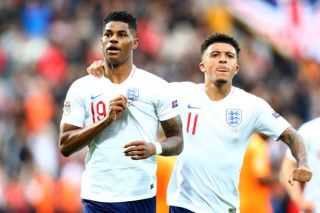 The prospect of seeing Jadon Sancho link up with Anthony Martial and Marcus Rashford is mouth watering.

This week Rashford was quizzed by Bleacher Report on what’s ‘link-up play’ would be like if Sancho made the move from Borussia Dortmund to Manchester United this summer.

Rashford responded positively and made it clear he wants Sancho to join the club. The striker hailed his fellow countryman, saying he is a ‘great player, a new generation player.’

The Mirror claim that United are prepared to break their transfer record for the winger, who is reportedly valued at around £100-£120m.

Here’s what Rashford has to say on what it would be like to play with Sancho at United.

“It obviously would be good, Sancho’s a great player, a new generation player. It’s definitely exciting to watch him become the player he’s becoming.

“Hopefully we can play together that would be good.

“He plays off the cuff, he’s creative, imaginative, I think they’re the things you need to do to be world class.”

Check out the clip below:

Sancho became the player he is today because he was willing to take risks as a youngster. He left Pep Guardiola’s Man City for first team football, which he got at Borussia Dortmund, but now it may be time to look at the bigger picture and return to England.

Sancho’s potential arrival would address a big issue for United, with Solskjaer short of options out wide on the right.

This very much depends on what affect the coronavirus will have on the transfer market.