Juventus have reportedly offered Aaron Ramsey as a makeweight in an audacious bid to sign Manchester United midfielder Paul Pogba this summer.

The Welsh international has played a peripheral role in Turin this season, failing to make an impact under new boss Mauricio Sarri.

Ramsey has made just nine Serie A starts this term, scoring three goals.

But the Metro claim that Ole Gunnar Solskjaer is an admirer of the 29-year-old and would be interested in bringing him to Old Trafford.

The report claims Solskjaer feels Ramsey’s talent would complement United’s midfield comprising of Bruno Fernandes, who shares a similar flair in his game.

According to the Transfer Window Podcast, United are open to the idea of selling Pogba in the summer transfer window, if their evaluation can be met.

The Frenchman has barely featured for the Reds this season after sustaining a serious ankle injury that required an operation.

And Ramsey is seen as a player that could help facilitate negotiations with Juventus.

Juventus are one of few clubs that have the financial power to afford a player of Pogba’s calibre, but they may not be willing to meet United’s full asking price given the COVID-19 crisis.

This is why using a player plus cash deal may give them a more realistic chance of agreeing on a deal for the World Cup winner.

We are unsure how keen the former Arsenal midfielder would be to make the move back to England, just a season after his big move to the continent.  Ramsey may want to stay in Turin and battle for his place in Mauricio Sarri’s first-team.

But if it is made clear that he is surplus to requirements, United could be his most attractive option.

• Man Utd offered Ramsey in Pogba deal
• Chelsea + Everton bid €35m for Gabriel
• Could there be no transfer window at all?
• COVID19 epidemic=takeovers on the cheap?
• Premier League declared null + void?
• No title for Liverpool?
• Hero + Villainhttps://t.co/QNyc9vRvrW pic.twitter.com/pSkWOyg79h 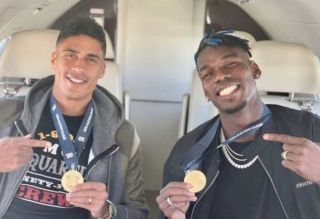