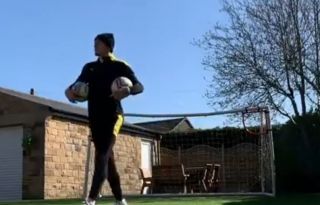 Harry Maguire is trying to keep himself occupied during the self-isolation period, so he’s attempted the #HomeTopBinChallenge for social media.

The Manchester United defender pulled off the perfect #HomeTopBinChallenge by shooting the ball into the top right corner of the goal in his very own garden.

Players are being asked to train in self-isolation during the coronaries outbreak and we still have no idea when the Premier League will resume.

In this clip, as seen below, Maguire strikes the ball twice in the same area of the top right corner of the goal.

Maguire is known for being a defender who likes to get the ball forward. The United captain is not shy of shooting for distance either.

It’s good to see the United lads carry out these challenge simply just to stay in touch with their fans, who may take inspiration from how they’re all using their time in quarantine.