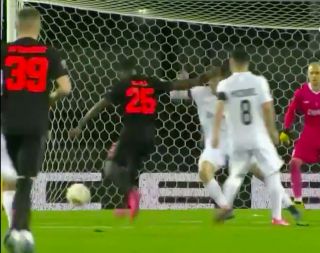 Odion Ighalo’s sensational volley against LASK has unsurprisingly been named as Manchester United’s goal of the month for March.

Ole Gunnar Solskjaer’s side thrashed their Austrian league opponents 5-0 in the Europa League last 16 in what turned out to be the last game before the coronavirus postponement.

In eery surroundings behind closed doors, the Nigerian scored a goal that have brought the house down had United fans been in attendance.

The Nigerian is already a cult hero at the club after a fruitful start to his loan spell that has brought four goals in eight appearances in all competitions.

And this strike was the finest of the lot, as he expertly controlled Bruno Fernandes’ pass before firing an unstoppable left foot volley into the top corner to give the Reds the lead in the tie.

We also won’t forget Scott McTominay scoring from about 40 yards into an empty net to secure the fantastic win over Man City in the last game played at Old Trafford.

What a start to life in a red shirt this man has had ❤️@IghaloJude’s stunner v LASK is our Goal of the Month for March! 🌟#MUFC pic.twitter.com/D0hqLMpaYi