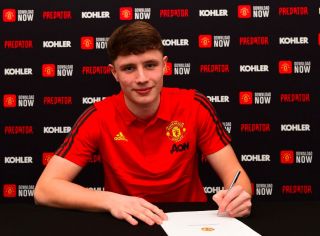 The latest talented youngster has signed their first professional contract at Manchester United.

Dillon Hoogewerf announced on his Instagram that he has penned his first pro deal at the club after impressing since his move from Ajax’s prestigious academy.

And talented defender Will Fish has followed in the striker’s footsteps and expressed his delight at the news via social media.

Of course, it’s a struggle having to live without football at the moment but its encouraging to see United secure the long-term futures of some of their brightest young stars.

Fish, 17, made his under 23 debut for Neil Wood’s side this term and has show maturity beyond his years for the academy sides this season.

The centre-back obviously has a long way to go to break into Ole Gunnar Solskjaer’s first-team at Old Trafford but this is a huge step in any aspiring footballer’s career.

Solskjaer has also proven with his consistent selection of the likes of Brandon Williams that there is a pathway from the academy to first-team if the desire and quality is there.

Everyone at Stretty News would like to congratulate Will on his first deal at the club.

Delighted to sign my first professional contract with @ManUtd, can’t wait to be back 🔴 #mufc pic.twitter.com/ZGQF4cWBO7