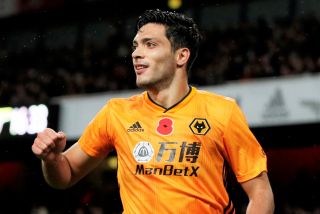 Raul Jimenez has responded to his own transfer speculation, following links to Manchester United earlier this season.

The Wolves forward has enjoyed another impressive season in the Premier League, scoring 13 goals in what has been another successful campaign for Nuno Espirito Santo’s side.

His performances have led to the reported interest of Man Utd, as per The Sun back in March, while Football London also suggested that both Arsenal and Tottenham are interested.

Wolves fans will take comfort in what Jimenez himself had to say about the reports as it looks like he’s happy to stay at Molineux.

Speaking on Facebook (via GOAL), the Mexico international seemingly committed his future to Wolves, saying, “I have a contract until 2023. It’s not that we have to qualify for the Champions League in order to stay. I’m good [here], happy with Wolves, doing important things — me as well as the whole team.”

Jimenez is a fan favourite in the West Midlands and they would be devastated to lose a player of his quality. He would be a good signing for United but I’d like to see us go a bit bigger for a centre-forward in the summer.

No excuses if we get Champions League. I’ll be expecting a marque signing then.